The Healthiest Fish To Eat 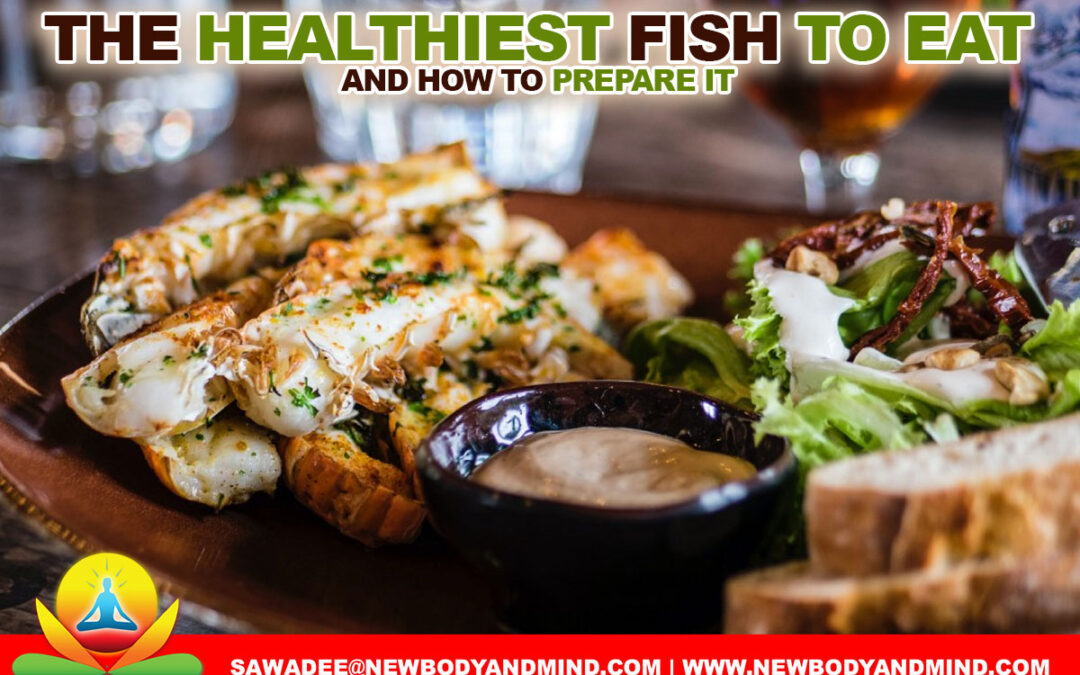 Although human beings have evolved over many centuries to become omnivores that can subsist on a vast array of foods, the ideal diet for health remains an area of hot debate. Scientific evidence has so far shunned the far extremes, for essential micronutrients are oftentimes only present in a subset of specific sources (e.g vitamin B12 in animal protein and folate in leafy green vegetables), and are kinder towards more balanced diets, such as the Mediterranean diet.

Earlier this year, cardiologist James O’Keefe and colleagues published an interesting article on the pesco-Mediterranean diet in the Journal of the American College of Cardiology. This diet, which some think could be the healthiest diet science has yet identified, is based on striking a healthy balance of plant foods (vegetables, fruits, legumes, nuts, and olives), fish/seafood, along with moderate amounts of dairy and eggs. The evidence is strong for this particular diet. Multiple clinical trials and epidemiological studies have been performed, all of which nod at strong cardio-protective evidence.

For the third consecutive year, the Mediterranean diet was ranked #1 for overall health by the U.S. News & World Report, which deploys a panel of 25 nationally recognised experts to give their verdicts on 35 of the most popular diets for their health benefits. The Mediterranean diet was described as nutritious, safe, relatively easy to follow, protective against cardiovascular disease and diabetes, and effective for weight loss.

In crude terms, this diet is basically a vegetarian diet with a healthy ration of fish and other sea consumables. While an abundance of guidelines and articles are available on the vegetarian front — it’s a diet in of itself after all — the boundaries are less clear for their ocean-dwelling counterparts. It’s then vital to understand the importance of selecting the right fish, and how to best prepare them.

Fish are well-known for their rich Omega-3 constituents, which make up the lion’s share of its cardio-protective properties, able to significantly reduce cardiovascular disease risk. O’Keefe’s paper demonstrated that higher fish consumption has been associated with reduced heart failure risk and a reduction in the incidence of metabolic syndrome.

The current Dietary Guidelines for Americans recommend that adults consume fish and/or seafood at least 3x per week, totally at least 8–10 oz (226–283 g) per week, preferable in place of other protein foods such as red meat, poultry, or eggs.

Besides its high Omega-3 fatty acid content, aquatic animal food sources also provide an array of vitamins, minerals, and other essential nutrients, some of which are not readily accessible in vegetarian or vegan diets. Vitamin D for example is absorbed more readily in the gut with the presence of fatty fish, which can boost bone health and immunity.

Furthermore, fish and seafood provide high-quality protein, which helps stimulate satiety and helps the building and maintenance of muscle and bone mass.

Adverse neuro-cognitive development was not seen, even with the highest amount of fish or seafood consumption (>100oz/2.8kg per week) despite associated increases in mercury exposures — which runs contrary to common concerns. In fact, two systematic reviews demonstrated that fish and seafood consumption was associated with dose-dependent benefits to neuro-cognitive development that became significant at 4oz/week and climbed up from there.

What is the best fish to eat? Do they matter at all?

O’Keefe, who is also a Professor of Medicine and Medical Director of the Charles and Barbara Dubok Cardio Health & Wellness Center at Saint Luke’s Mid American Heart Institute, says that despite evidence against mercury intoxication, it is prudent to choose low-mercury fish such as salmon, sardines, trout, herring, and anchovies, all of which are naturally high in Omega-3 fatty acids.

Other seafood in the list include scallops, shrimp, lobsters, oysters, and clams — which granted, are not as high in Omega 3’s as their swim-capable counterparts, but remain low in mercury.

Other sources advise to beware of fish with notoriously high levels of mercury, such as shark, swordfish, king mackerel, and tilefish, though they’re pretty uncommon to begin with. Additionally, canned sardines are thought to be more nutritious than fresh because you’re consuming the entire fish — bones and skins included — which contain healthy collagen and calcium. Consumer Reports suggest that both canned and fresh fish are good sources of protein and other important nutrients, one isn’t necessarily healthier than the other.

A Harvard doctor echoed this sentiment, saying that canned fish is pretty much on par with fresh fish. Furthermore, the article advises us to choose fish packed in water (or brine) whenever possible since water and oil naturally don’t mix, locking the beneficial Omega-3s in the fish. When fish is packed in oil, some of the Omega-3 fats are lost when the oil is drained. One other thing to be careful with is sodium (or salt). The American Heart Association recommends no more than 2,300mg a day, and ideally less than 1,500mg for a healthy adult. While you can control the amount of salt that goes into your fresh fish, canned fish comes with a given amount of sodium. With this in mind, you should really be checking the nutrition labels on your canned fish (and every other product too, ideally).

To get into specifics, health writer Nicole Davis came up with a list of 12 best fish to incorporate into your diet, which among others include Alaskan salmon, cod, herring, mahi-mahi, striped bass, wild Alaskan pollock, and arctic char. Another source commends albacore tuna, pacific sardines, rainbow trout, and freshwater Coho salmon.

WebMD separates fish into several subcategories. Lean fish, such as tilapia, cod, and flounders pack a protein punch with fewer calories than their Omega-3 rich siblings such as salmon, herring, and sardines. Shrimp is excellent for its micronutrient content but its downside is low Omega-3s and high cholesterol profile.

Dietician Brierly Wright advise against 12 different fish for a variety of reasons, including imported catfish, which are almost never inspected for filth, sharks for their high mercury and socioecological reasons, some subspecies of Atlantic cod and tuna due to conservation status, and especially wild caviar, because sturgeons are seriously about to disappear from the face of the earth.

As a general rule of thumb, wild-caught fish tend to be lower in saturated fats, while farm-raised tend to have more Omega-3s. However, it isn’t uncommon for the latter to be associated with cultivation under unsuitable and nefarious conditions. Professor Mary Ellen Camire of Food Science & Human Nutrition at the University of Maine’s School of Food and Agriculture explains that wild-caught fish are not very carbon-footprint friendly because traditional fishing has been implicated with a lot of sustainability issues.

Aquacultures, a fancy term referring to farm fisheries, take care of sustainability by rearing their own produce. But not all of them are good. Though they intend well, some take up part of the animal’s would-be natural habitat. Shrimp farming, for example, is thought to be responsible for more than half of all mangrove loss. Fish feed also battles with sustainability because they are often made from ground-up fish, which again, needs to be fished. Some irresponsible companies also don’t treat fish waste properly, leading to water contamination that translates into your dinner.

Farm-raised fish tend to have a little more fat in their diet, so they may be a little tender and softer. Wild-caught fish, on the other hand, tend to be leaner. Professor Camire says that regardless of how they are raised, some fish are better than no fish. Still, it’s imperative that we be leery of international farm-raised products because of different standards of care.

“To give [the population] good-quality protein, we’re going to have to rely more on aquaculture,” says Prof Camire. “I think we’re going to be seeing a greater variety of farmed fish. And not to displace the fisherman on our coastlines, but the stocks are depleting and we can’t keep taking without replenishing. I think the seafood industry is going to change.”

The healthiest way to prepare fish

Registered dietician Ansley Hill in her article for Healthline says that although health professionals recommend people eat fish at least once or twice a week, the way you cook a fish can significantly change its nutritional composition — some arguably negating the healthful benefits potentially reaped from it.

Grilling and broiling are two common methods that involve fire. There’s a slight difference between the two in terms of fire orientation, in which grilling involves fire from below and broiling involves fire from above. Both methods are fast ways to cook tasty fish without adding any fats, but they can form harmful cancer-inducing compounds, especially if charred. This risk is directly proportional to time spent under heat exposure, so shorter cooking time is better if you can’t help grilling. Marination can apparently also reduce the formation of these harmful compounds.

Frying adds calories from oil, subjecting us to potentially unhealthy compounds such as Omega-6 fatty acids and reduce the healthful benefits of Omega-3s. Similarly, the high temperature in frying may additionally trigger the formation of carcinogenic compounds.

Poaching and steaming do not add oil to the fish and cook them at a lower overall temperature compared to other methods, which preserve nutrients and minimises the formation of said harmful chemicals. If poaching under plain water sounds unappealing to you, I recommend you to soup it up with water seasoned with onion, garlic, and herbs. Keep the liquid at a simmer, do not let it boil to maintain a lower temperature.

Baking causes less Omega-3 loss than frying and microwaving, and retains vitamin D better, though oil is usually part of the recipe. We recommend you use minimal amounts of a heat-stable, healthy oil like olive oil to keep the dish as healthy as possible.

Microwaving is similar to baking because it cooks at a relatively lower temperature and can preserve some nutrients better than some other cooking methods. Sous vide is also an excellent alternative, given you are patient enough (since it takes hours to prepare!) and possess the necessary equipment.

Lastly, eating the fish raw — such as in the case of sashimi — may completely remove harmful contaminants otherwise obtained from heat induction while keeping the essential nutrients unspoiled. Additionally, this practice can save time and preserve cultural traditions, though prudent care should be instilled in selecting your raw fish.

To sum it up, sous vide, microwaving, baking, steaming, poaching, and even raw are all acceptable ways to prepare fish without adding too many unhealthy compounds and stripping them off the useful ones. Grilling and broiling should be okay in moderation, but as much as you possibly can, stay away from the deep fryer.