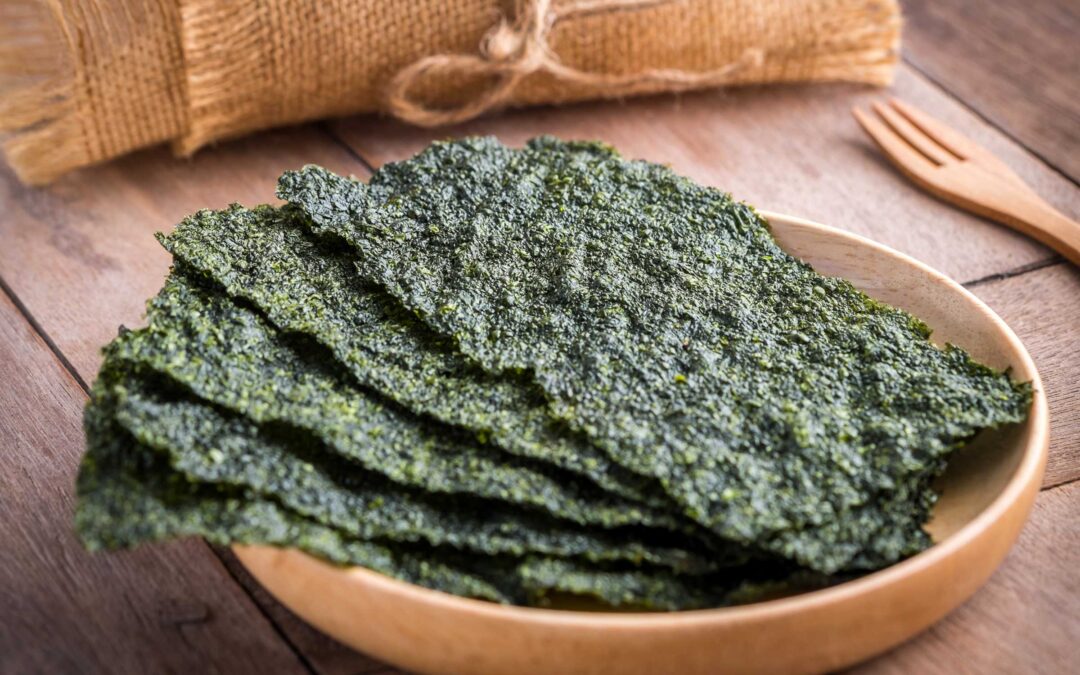 Iodine is an essential mineral we must get from our diet. Interestingly, our thyroid gland needs it to produce thyroid hormones, which have many important responsibilities in our body . The recommended daily intake (RDI) of iodine is 150 mcg per day for most adults. For women who are pregnant or nursing, the requirements are higher.

In fact, one-third of the population is at risk of deficiency, particularly those who live in areas that have only a small amount of iodine in the soil, including European countries. Iodine deficiency can lead to swelling of the thyroid gland, known as goiter, and hypothyroidism, which can cause fatigue, muscle weakness and weight gain.

Iodine-rich food sources that can help prevent a deficiency.

Wakame Seaweed in a Bowl. Seaweed is a plant that grows in the ocean. It is a good source of antioxidants, vitamins and minerals and is also low in calories. Seaweed is one of the best natural sources of iodine. However, the amount can vary significantly based on seaweed type, the region in which it grew and its preparation. Three popular seaweed varieties include kombu kelp, wakame and nori.

Kombu kelp is a brown seaweed sold dried or as a fine powder. It is often used to make a Japanese soup stock called dashi. In a study that surveyed seaweed samples from various Asian countries for their iodine content, it was found that kombu kelp contains, by far, the highest amount of iodine compared to other species of seaweed. Kombu kelp can contain up to 2,984 mcg of iodine per seaweed sheet (1 gram). This provides almost 2,000% of the recommended daily intake.

Excess iodine consumption is well-tolerated in the majority of people but could result in thyroid dysfunction for those who are susceptible.

Wakame is another type of brown seaweed that is slightly sweet in flavor. It is commonly used to make miso soup. The amount of iodine in wakame seaweed depends on where it is grown. Wakame from Asia has higher amounts of iodine than wakame from Australia and New Zealand. One study found that the average amount of iodine in wakame seaweed from various parts of the world was 66 mcg per gram, or 44% of the daily recommended intake.

Nori is a type of red seaweed. Unlike brown seaweeds, it has a much lower content of iodine.

Nori is the type of seaweed that is commonly used in sushi rolls. The iodine content in nori varies between 16–43 mcg per gram, or about 11–29% of the daily value (8, 9).

Cod is a versatile white fish that is delicate in texture and has a mild flavor. It is relatively low in fat and calories but offers a wide variety of minerals and nutrients, including iodine. According to the Icelandic Food Content Database, fish low in fat have the highest iodine amounts. For instance, 3 ounces (85 grams) of cod has approximately 63–99 mcg, or 42–66% of the daily recommended amount.

The amount of iodine in cod can vary slightly depending on whether the fish was farm-raised or wild-caught, as well as the region where the fish was caught.

Dairy products are major sources of iodine. The amount of iodine in milk and dairy differs greatly based on the iodine content in the cattle feed and the use of iodine-containing disinfectants during milking. A comprehensive study measured the iodine content in 18 different brands of milk. It found that all 18 brands had at least 88 mcg in 1 cup (8 ounces) of milk. Some brands even contained up to 168 mcg in one cup. Based on these results, 1 cup of milk can provide 59–112% of the recommended daily amount of iodine. Yogurt is also a good dairy source of iodine. One cup of plain yogurt provides approximately half of the daily recommended amount.

Currently, both iodized and uniodized salt are sold in many countries.

The addition of iodine in table salt began in the in the early 1920s to help decrease the occurrence of goiters, or swelling of the thyroid gland.

There is approximately 71 mcg of iodine in 1/4 teaspoon of iodized salt, which is 47% of the daily recommended intake. However, salt also contains sodium. In the last few decades, iodine intake has decreased. This is likely due to the push of major health organizations to restrict daily sodium intake to prevent or treat high blood pressure. Nevertheless, salt only seems to raise blood pressure in salt-sensitive individuals, which is about 25% of the population.

Shrimp is a low-calorie, protein-rich seafood that is a very good source of iodine. Additionally, shrimp provides key nutrients such as vitamin B12, selenium and phosphorus. Shrimp and other seafood are good sources of iodine because they absorb some of the iodine that is naturally present in seawater.

Three ounces of shrimp contain about 35 mcg of iodine, or 23% of the daily recommended intake (6).

Tuna is also a low-calorie, high-protein, iodine-rich food. Furthermore, it is a good source of potassium, iron and B vitamins. Tuna is also a good source of omega-3 fatty acids, which may lower our risk of heart disease. Fish higher in fat offer lower amounts of iodine. Since tuna is a fattier fish, the amount of iodine found in tuna is lower than leaner fish varieties, such as cod.

However, tuna is still a relatively good source of iodine, as three ounces provide 17 mcg, or about 11% of the recommended daily intake.

Eggs are also a good source of iodine. For fewer than 100 calories, one whole egg provides a lean source of protein, healthy fats and a wide assortment of vitamins and minerals. However, the majority of these nutrients, including iodine, come from the yolk. Egg yolks are a good source of iodine because it is added to chicken feed. Yet since the content of iodine in chicken feed can vary, the amount found in eggs can also fluctuate. On average, one large egg contains 24 mcg of iodine, or 16% of the daily value.

Prunes are plums that have been dried. Prunes are a good vegetarian or vegan source of iodine. Five dried prunes provide 13 mcg of iodine, or about 9% of the daily value. Prunes are commonly known for helping relieve constipation. This is because of their high content of fiber and sorbitol, a type of sugar alcohol. Prunes are high in many vitamins and nutrients, including vitamin K, vitamin A, potassium and iron.

Because of the nutrients prunes offer, they may help improve heart health, decrease the risk of colon cancer and even help manage weight by decreasing appetite.

Lima beans are a good source of fiber, magnesium and folate, making them a heart-healthy choice. They are also a relatively good vegetarian or vegan source of iodine. Due to the variation of iodine in soil, irrigation water and fertilizers, the amount of iodine can vary in fruits and vegetables. However, on average, one cup of cooked lima bean contains 16 mcg of iodine, or 10% of the daily value.